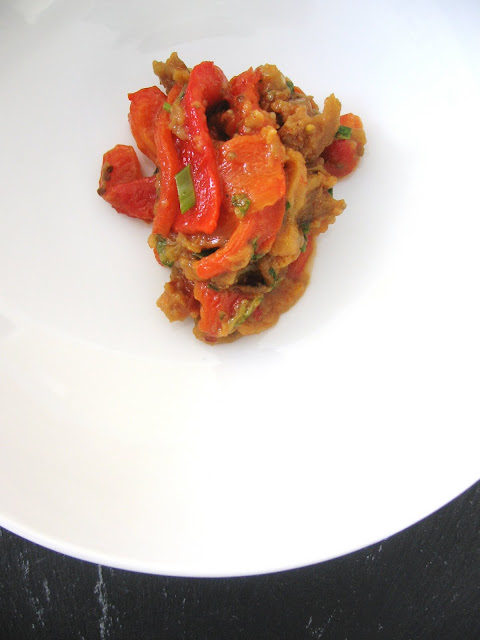 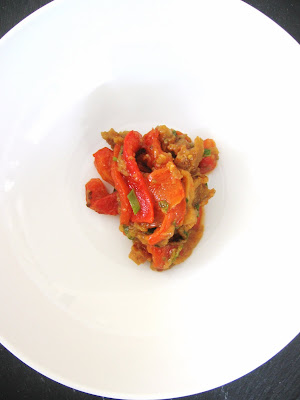 Just delivered a meal to a friend of mine.  I know this friend for twelve years now, since her days in Israel, when her husband was with the American Embassy there.  Jonathan was on a two year project in Israel at the same time, and to me the opportunity to be back in Israel was coming full circle. Although my friend's kids aren't the same age as my kid, neither the same gender (not that you can't befriend the opposite sex but that is a whole different discussion altogether), a lasting family friendship was formed while our kids went to The American School in Israel. We picked up where we left when both found ourselves back in the DC area. This is first installment from a dinner of Mediterranean chicken skewers marinated overnight, Majadra (rice and lentils) and roasted eggplant, bell pepper and sauteed cherry tomatoes Moroccan salad.  Can't shake that Mediterranean theme from my repertoire, just a second nature.  I also made another batch of the chocolate chip banana muffins last night so I brought some over.  Had broccoli as well, but broccoli is not exactly a signature Mediterranean veggie.  Gave it a quick saute with garlic, salt and a twist of lemon.  To 'Moroccanize' the broccoli I chopped some of my Moroccan preserved Meyer lemons and sauteed couple more minutes with the preserved Meyer lemons. Please find the cooked salad recipe in this post the rest of this aromatic meal is coming soon.
Eggplant, bell peppers and cherry tomatoes salad:
Ingredients:
1 large eggplant
4 red bell peppers
1/2 cup plus cherry tomatoes
1-2 scallions
2-3 garlic cloves
Handful of parsley, finely chopped
Juice of 1/2 - 1 lemon
1/2 -1 teaspoon paprika
1/2 - 1 teaspoon cumin
Salt
Canola oil
Directions:
Line a baking sheet with parchment paper.  Pierce eggplant all around with a fork and place on baking sheet.  Half and seed bell peppers and place skin side up on baking sheet next to eggplant.  Roast under grill mode in oven until skin of bell pepper is somewhat charred.  Turn eggplant as it broils to broil all sides.  If using outdoor grill obviously grill bell pepper skin side down:). Remove bell peppers from oven and place in a ziploc bag and seal, it will be easier to remove skin that way. Meanwhile remove skin of eggplant and chop to a roughly mashed consistency.  Take one bell pepper at the time out of ziploc bag and peel skin off.  Once done with the rest of bell peppers, slice into thin strips and add to eggplant.  Half cherry tomatoes and toss in a bit of canola oil (2 tablespoons approximately), on high heat for couple of minutes until cooked but still retains it's shape. Add tomatoes to eggplant/bell pepper mixture.  Add parsley, garlic, lemon and diagonally, thinly sliced scallion(s).  Add couple more tablespoons of canola oil, paprika, cumin and salt according to taste.  Keep in mind you can adjust proportions if ingredients according to you tatse, but this is to begin with is an excellent start.
Enjoy over challa or baguette, as part of your weekend or weeknight meal, or bring your sandwich to complete new heights by adding this cooked salad. Can also be perfect as a bruschetta. Enjoy!
at February 18, 2010
Newer Post Older Post Home
©2009-2020 Shulie Madnick. All rights reserved.