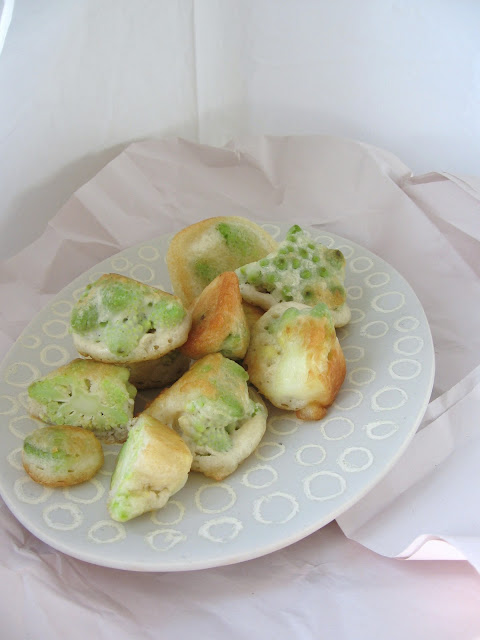 My apologies in advance I absolutely love photographing raw ingredients. Narrowing down shots to be published is a tough decision. Take for example this intriguing and statuesque subject matter, the Romanesco. Every snap shot, and I took many, came out perfect. I have not altered and photoshopped the snapshots at all. My initial photos a couple of months ago, came out terrible, hence the delayed post with a new batch. I know some won't be able to relate but think of it like a baby or a pet in which whatever angle you shoot, you go aww, and are so very proud. I did write in the past how I connect with these inanimate subject matters, for me they come alive! Even if snapshots seem repetitive it has some degree of movement and changes in angle ever so slightly. It was important to me to showcase it and at least I didn't subject you to dozens of these two degree movements 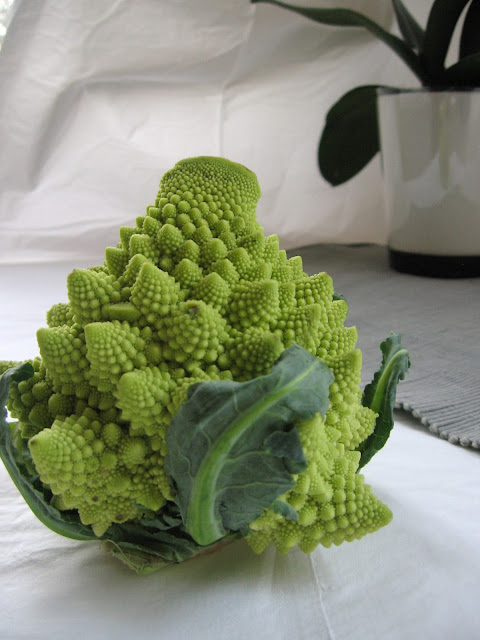 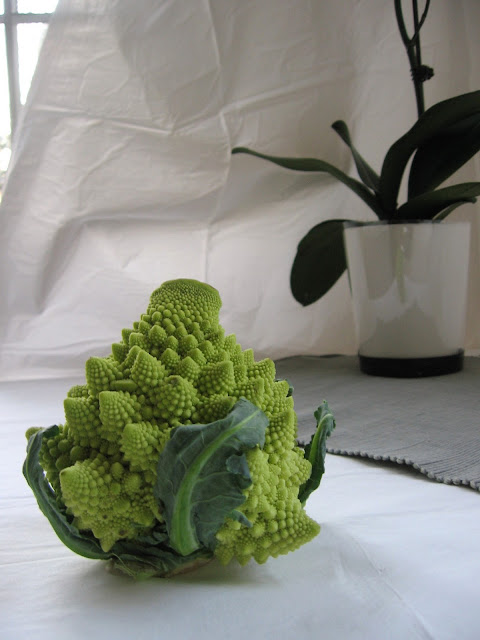 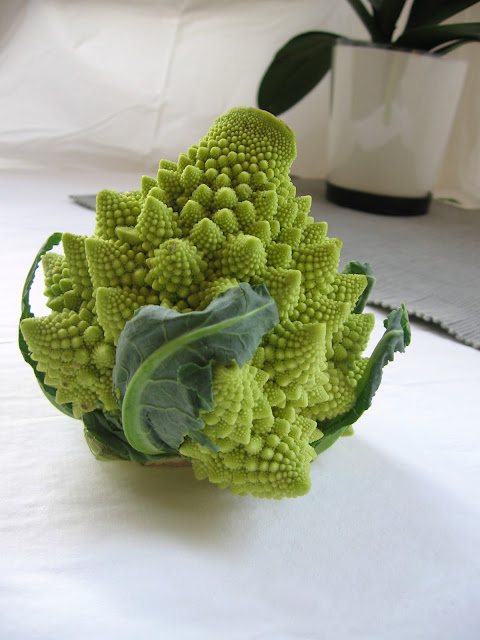 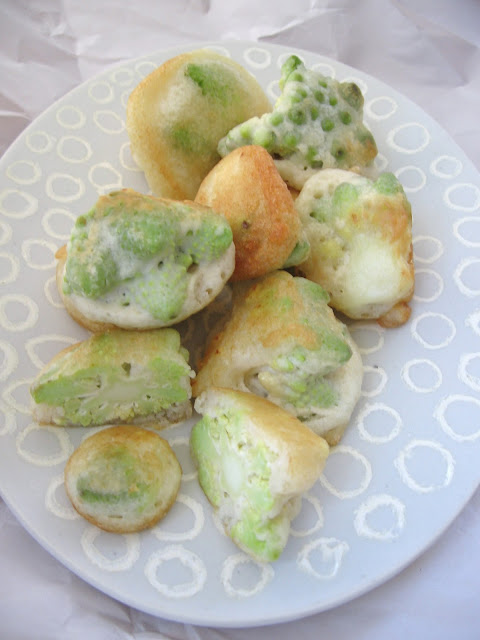 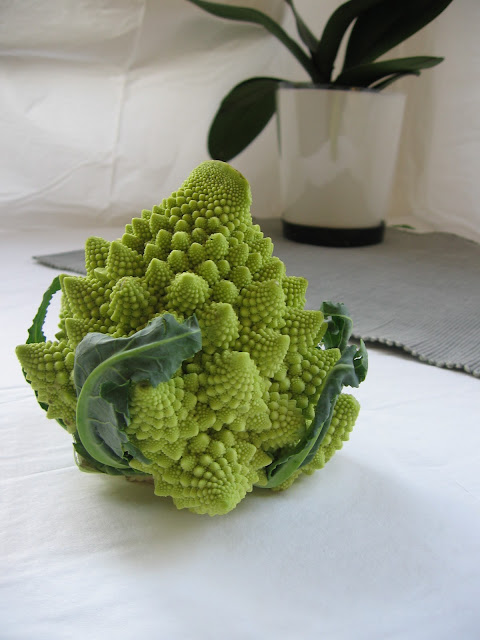 When I saw this vegetable at first, the connotation that came to mind was Jurassic Park and not necessarily the vegetation but the dinosaurs. I first saw this Roman cauliflower at Wegmans, it has a more delicate flavor than the sharper flavored cauliflower. Romanesco is a summer vegetable and I was lucky to snag the tail end of the crop around Thanksgiving. Wegmans showed some photographs of the Romanesco green peeking through a blanket of white, surviving a snow storm in NY. Funnily images of Jurassic Park didn't only cross my over active imagination but also Wegmans blog writer's. You can find some interesting information from Wegman's about sourcing out Romanesco crops to NY farmers here and a Pan-Steamed Romanesco recipe from the chain here. You can substitute any recipes calling for cauliflower or broccoli with Romanesco 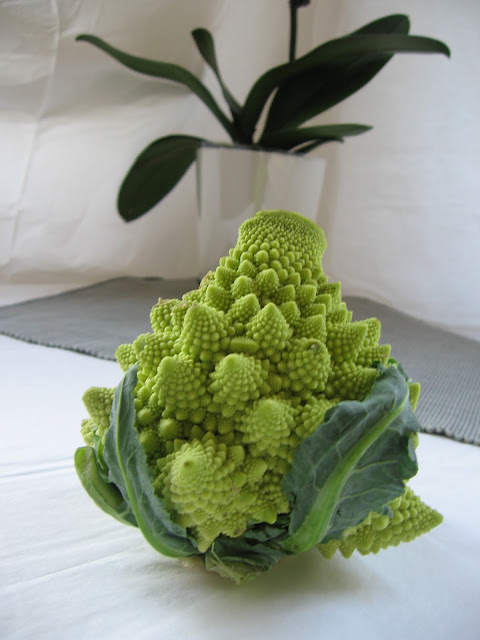 Back in March this year, I came across a recipe I was mesmerized by from an Israeli chef and restaurateur, Erez Komrovsky, who I have written about his, second to none, intuitive cooking in previous posts. The recipe called for broccoli and cauliflower florets. You stuff the crevices of the florets with Kashkaval cheese, most affiliated with and known as a Bulgarian yellow sheep's milk cheese, but many Balkan countries are known for their Kashkaval.
One of my best friends in the army was Anat who is a Bulgarian Israeli, at her home I was introduced to Kashkaval and the culture of cheese. She was and still is the queen of quiches, she tossed some vegetables and cheeses together to make for an original, delicious quiche, without fail, every single time. While I was not introduced to it for the first time, I had marzipan in the oldest form of artisanship, brought from her grandmother's home in Jaffa, Israel, to her home in Reut, near Jerusalem. In the United States you can find Kashkaval in ethnic stores. I haven't seen it at Whole Foods or Wegmans but you can always substitute other yellow cheese you got handy at home. Parmesan and Manchego should work well. I made a few batches of this recipe some with cheese in the florets crevices, and some without.
What really attracted me to this recipe is the beer and honey batter. The crispiness of these florets as they come out still warm from the skillet is sensational. I meant to post it for Chanukah but the recipe is timeless and universal. It took me months from the day I scouted this recipe till the day I made it and it did not disappoint or let me down. If anything, I am amazed how it surpassed my expectation and made me realize even more so the originality of this recipe and chef.
Lael, of the Lael and Giuliano Hazan duo, of the famed Italian culinary world pedigree, was gracious as always and agreed for me to link to their Romanesco post Fusilli with Broccoflower. It will give you more authentic Italian recipe for this glorious vegetable. You can find Lael on twitter @educatedpalate and you can explore Lael and Giuliano's cooking school, cookbooks and recipes on educated palate website here.
Romanesco Floret Fritters in Beer and Honey Batter
Ingredients:
1 Large head Romanesco, cauliflower or broccoli, cut up to florets
Some Kashkaval, Parmesan or Manchego or any yellow cheese (optional)
For the batter:
3/4-1 cup beer
1 1/2 Cups all purpose flour
2 Large egg whites
1 Tablespoon honey
Heaping teaspoon of baking powder
1/4 Teaspoon salt
For frying:
Canola oil for frying (NOT deep frying although original recipe calls for it)
Directions:
1. Heat up oil
2. Insert small chunks of cheese inside florets crevices.
3. Mix dry batter ingredients in one bowl. Mix wet batter ingredients in a second bowl. Whisk dry and wet ingredients into one batter.
4. Dip florets into batter, shake off excess batter, and fry until golden on all sides. Take out with slotted flat spatula and drain on paper towel lined plate. I fried it lightly golden but you can fry it to a deeper gold hue.
Best served as the fritters come out of skillet and are still warm. Enjoy the crunch and the flavor!! 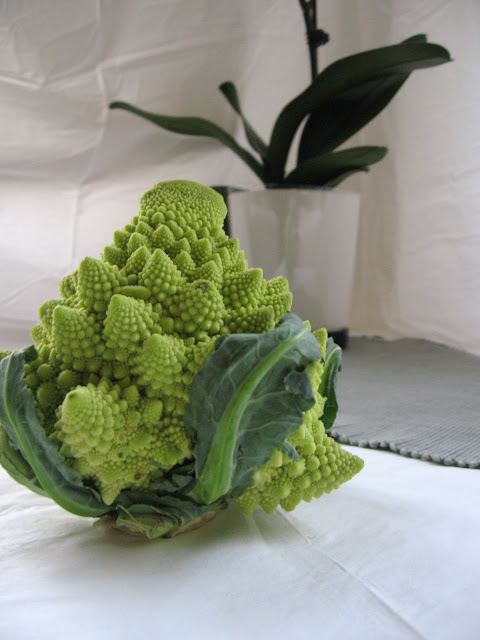