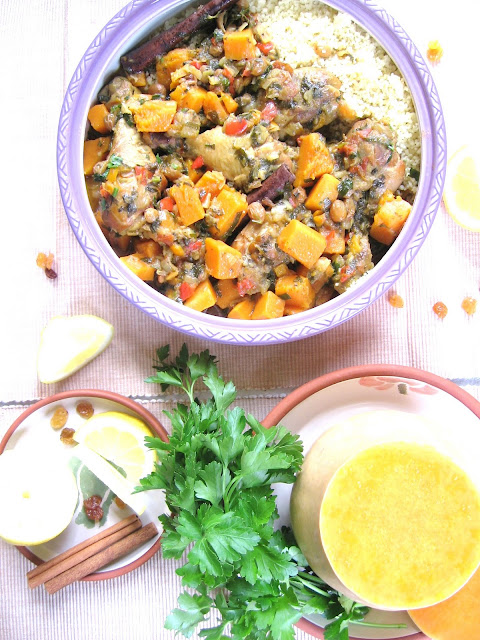 There are few dishes I've been craving recently, some Indian samosas, Indian flat bread and vegetarian curry but today I got a taste for Mediterranean flavors. As the chicken was defrosted in the fridge I could have made one of the few variations of Mediterranean braised chicken I made in the past but I wanted a newer recipe to explore. I remembered seeing years ago, as it turns out 2002, a Mediterranean braised chicken recipe in one of Fine Cooking's magazines. I couldn't really remember the title, I only knew it was Mediterranean and the picture was burnt in my mind. I started going through many of my archived magazines when I thought why not just google it instead and sure enough it instantly came up. I saw the picture and I almost could taste it, you see I haven't had lunch yet. 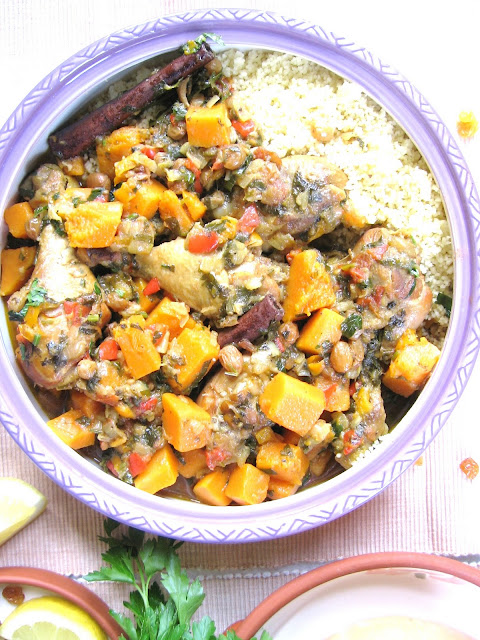 It is a Friday and Jonathan and I, since Sagie (gie as in geese) is away in college, don't make an effort, and fell out of the habit of Friday night nice sit down family Shabbat dinner. I thought it would be nice as opposed to dining out or have a quick take out. It will be nice to have a luscious dinner of Mediterranean braised chicken with couscous and some salads. A purple cabbage coleslaw, an Israeli tomato and cucumber salad and roasted eggplant. 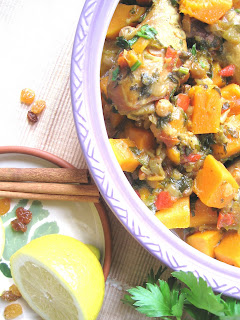 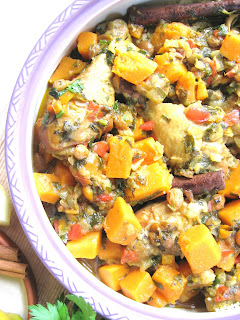 I adjust a recipe according to whim but also I adjust as I go along if I am in the midst of making it and realize I don't have dried figs I substitute, as in this case with golden raisins. I also didn't peel and core the tomatoes, as I didn't feel it was necessary in this dish and saved some time. I also like with this method to start on the stove and complete the dish in the oven. I added diced bell peppers. You can add a tablespoon of honey if you wish. I would have added chickpeas, if we didn't go through them like water. Don't have squash, use pumpkin or zucchini or both. Point being make this dish your own.:)
Braised Mediterranean Chicken
inspired by Fine cooking Magazine recipe here

Directions:
1. Heat up oil in a large dutch oven on low/medium. Black pepper and salt drumstick and golden on both side in heated oil. Scoop out of dutch oven once golden and set aside in a large bowl.
2. Saute onions, garlic, cinnamon sticks, saffron and bell peppers on low medium heat in same dutch oven. Scrape golden bits and pieces into onion. Work with a heat resistant rubber spatula or heat resistant hard plastic spatula. Saute onions bell pepper mixture until soft.
3. Add raisins and continue to saute until they plump. Turn on oven to 350F. Add the chicken back into the onion mixture in the dutch oven.
4. Add cumin, cinnamon, tomatoes, parsley, cilantro Tabasco and lemon juice. Cover with water or chicken broth and bring to a boil. Once boiled turn off stove, put a lid on and put in a preheated 350F oven.
5. Cook in oven for 1/2 an hour and then add the butternut squash and cook for 10 minutes longer.
Note: I like the chicken to fall off the bone so I cook for total of 1 hour adding the squash 10 minutes before dish is done. Squash cooks really fast but check for doneness before taking out of the oven.
6. Scoop into a large dish and garnish with lemon wedges, pomegranate seeds and fresh parsley.