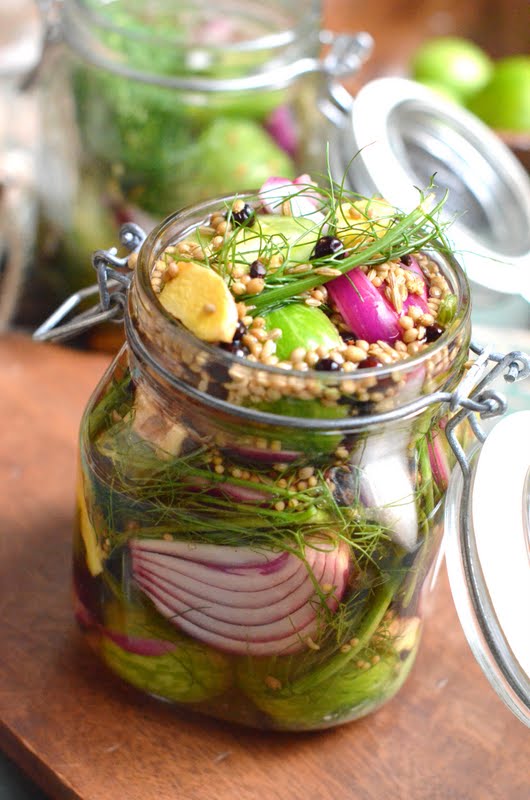 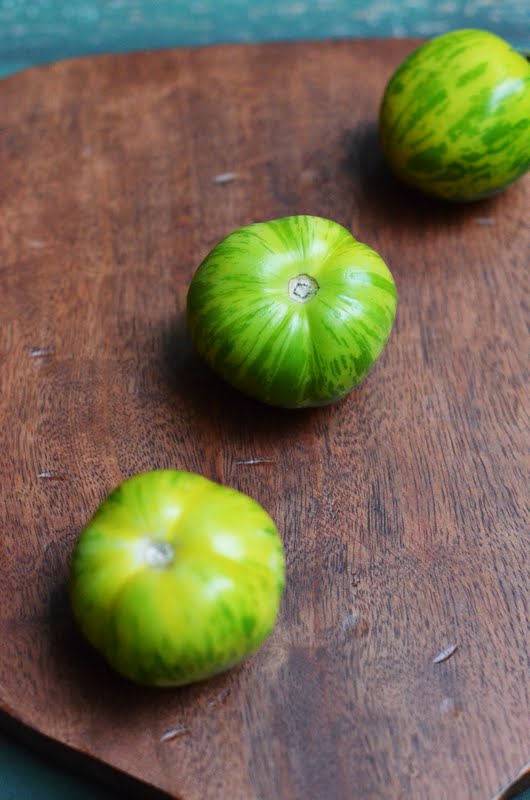 I know this is a way overdue recipe but to compensate I bring you two. I was so giddy with excitement as I am getting the hang on my camera that I published the photos without a recipe. Meanwhile, I managed to make a roasted salsa with both red and green tomatoes inspired by a Tomatillo Salsa Verde I saw months ago at Barb's Creative Culinary site. It obviously left and impression. I pretty much followed the recipe with one exception, I charred the vegetables on the grill, can be done on broiler mode in the oven, to get that further smoky flavor. I made the green and red separately and then decided to combine both. 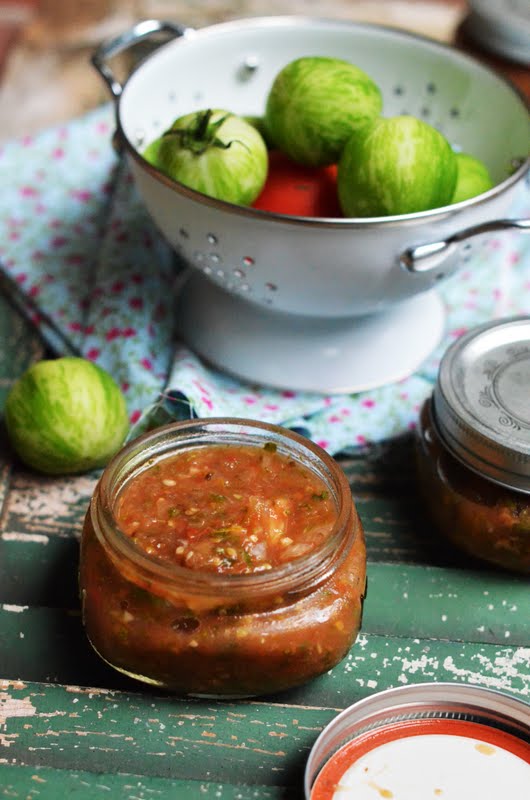 I had couple pounds of heirloom green tomatoes still left and I was determined to pickle them.While speaking to another friend of mine, bouncing off ideas while she was also canning, I thought myself so brilliant, incorporating the sprigs of fennel I just bought at the market into the brine. I was thinking Mediterranean inspired., but then a sheer true brilliance struck and mind you, not mine! 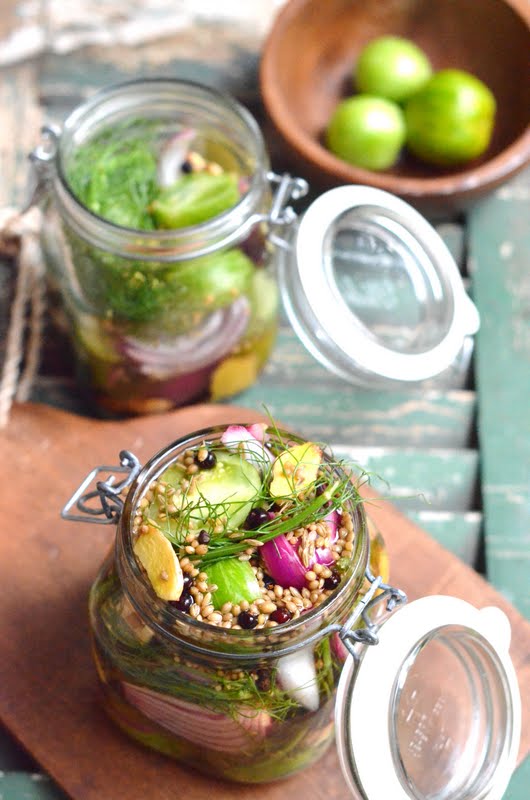 I have been searching and brainstorming to achieve that perfect brine. I knew I wanted, not salt, but vinegar based brine, and would love to use my favorite red wine vinegar in it. This morning I decided to check out Epicurious, the little I knew I would find a recipe I just flipped over. The wait, the process and time lapsed with publishing this post with a recipe was well worth it. 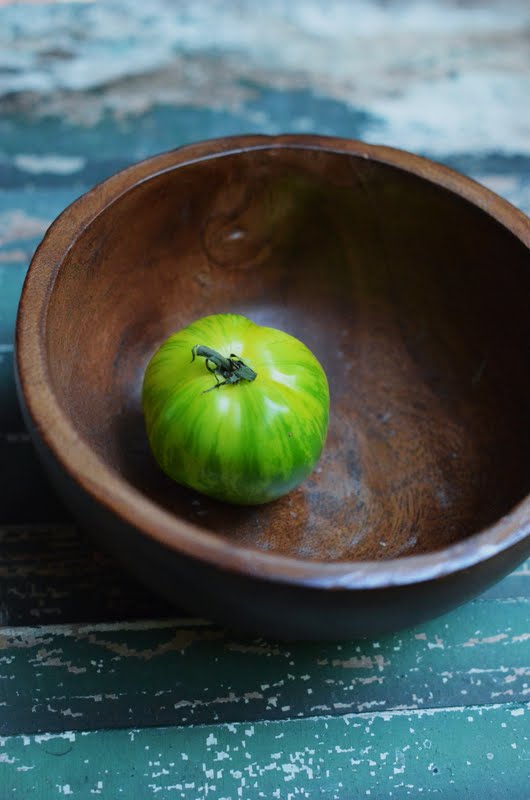 The recipe is from Bon Appétit September 2010, by chef Tony Maws From Craigie on Main in Cambridge, MA. Now I got to go and visit. Chef Maws added these, two week do ahead, pickles on top of a hamburger and a hamburger bun with spicy ketchup. Recipes can be found on Epicurious site. 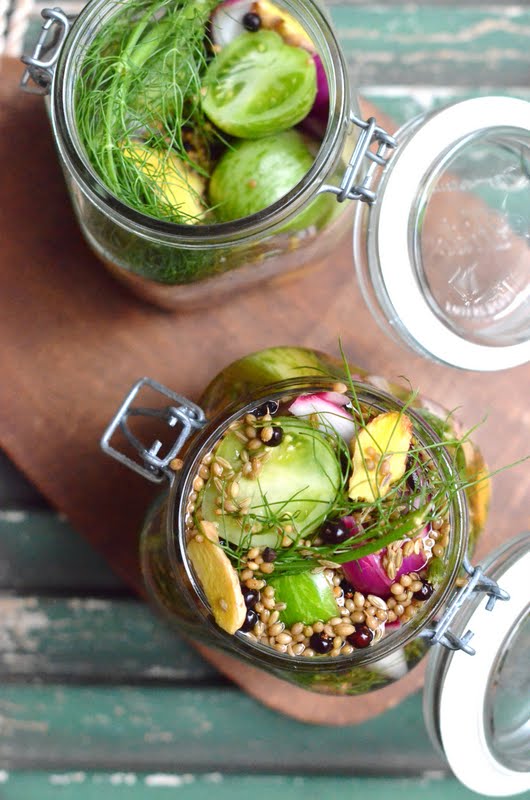 I used fresh ginger instead of horseradish called in the recipe. I also substituted jalapeno for the serrano, of course used tomatoes instead of cucumbers and couple other little variations in recipe and directions. 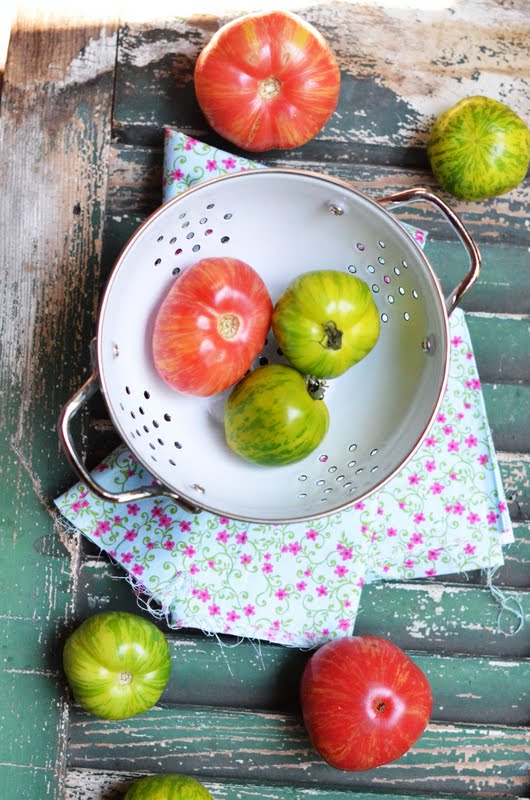 Getting sidetracked a bit, I have been off the grid lately, as much is happening behind the scenes. As you remember I published my first professional feature at Whisk Magazine recently, featuring four photos and recipes by me with fun Q&A. I am writing few additional pieces for Jewish and other publications that will be published throughout the rest of this year. One about origin, preservation of culture, of an heirloom recipe is coming out tomorrow. I will keep you posted. 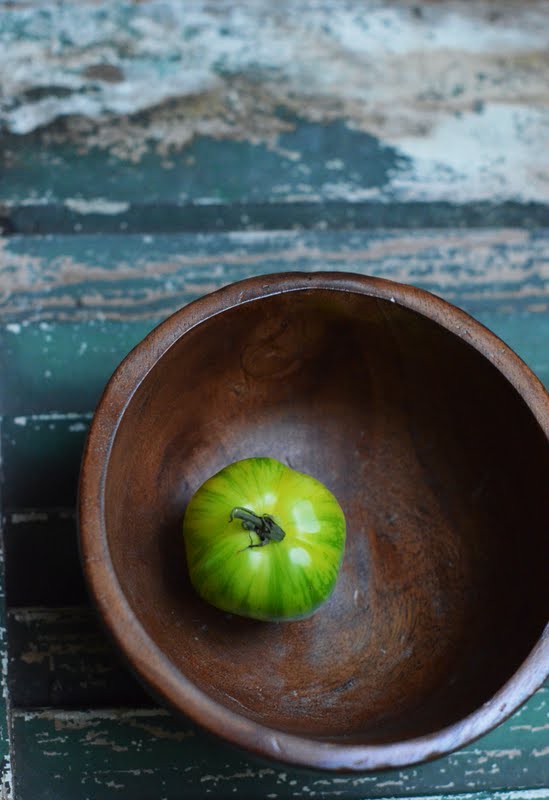 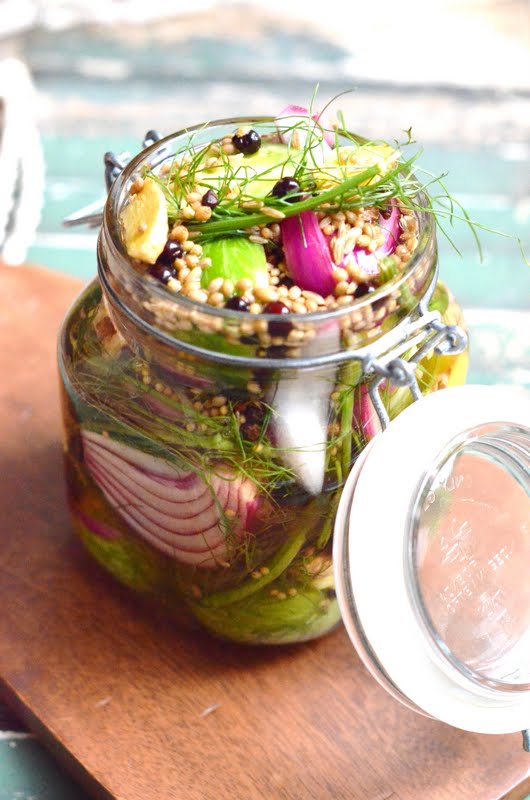 Ready according to the chef in two weeks. Will keep up to two months or longer refrigerated. If canning, can keep in a cool place in the pantry unopened, up to a year. I will probably wait four weeks before serving and keep refrigerated longer than 2 months.
at August 09, 2011
Newer Post Older Post Home
©2009-2020 Shulie Madnick. All rights reserved.