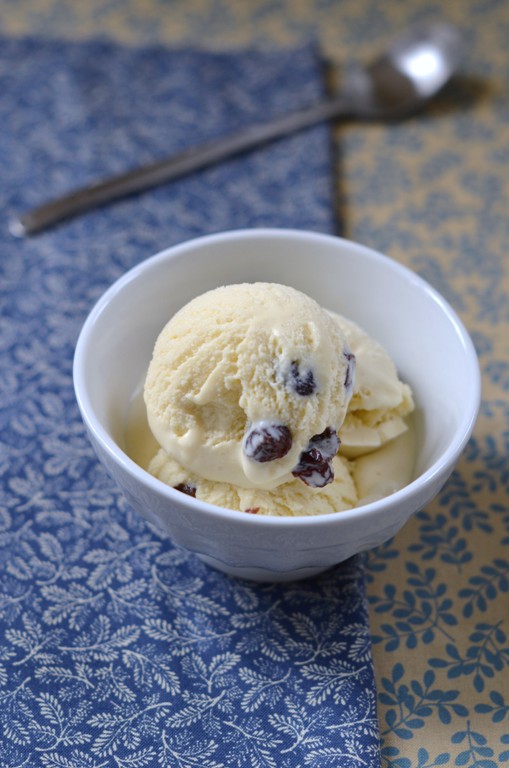 There are few ice creams and gelatos I consider winter. Why should summer have all the fun?! A few will unfold in the coming winter months. Though I am not a fan of booze in ice cream and gelato, I take an exception with rum raisin as I mentioned in my post Madagascar Vanilla Bean Banana Ice Cream. Rum raisin was on my ice cream bucket list, and I let too much time lapse without scratching it off. 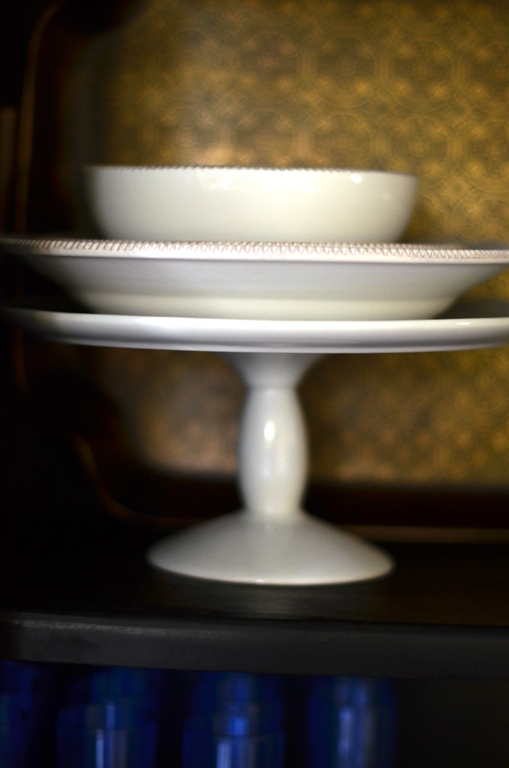 This Thanksgiving I was thrown a curve ball, I have to reinvent my Thanksgiving menu, gluten free. I call it Thanksgiving, re-imagined! One of our guests who is coming for Thankgiving and staying the long weekend has a severe gluten intolerence. 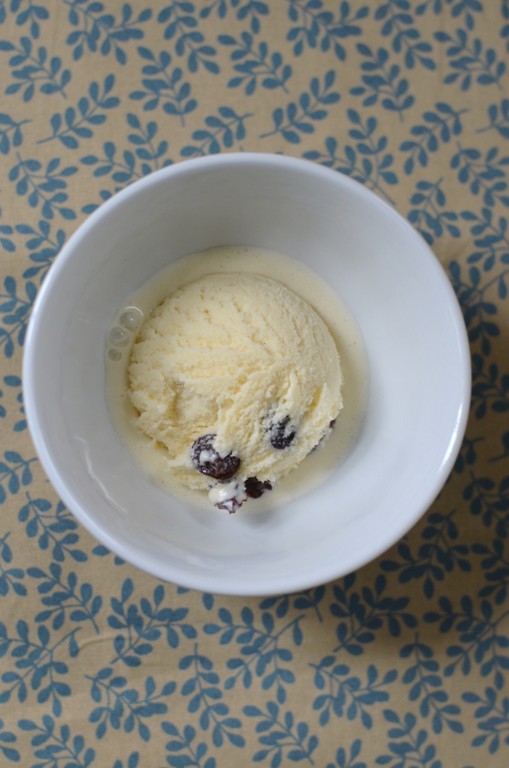 As I embarked on a mission mostly to bake gluten free breads and desserts, it was interesting finding out about xanthan gum. As I mentioned on twitter it does not sound too healthy, but turns out that only the name is nasty. I was appalled at its steep price tag, but the cheaper alternative guar gum is extracted from an unfamiliar to us tree. Would it trigger an allergy?! As you must know we have tree nut allergies and this space is tree nut free. 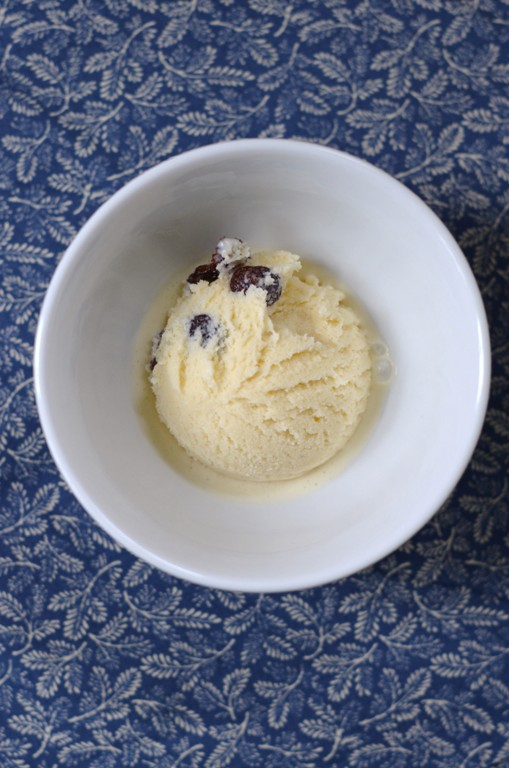 When it came to finding recipes that are gluten free, I found many used tree nut flours as a substitute, so it was a no go! I was trying to brainstorm and cram much education on the subject within a couple of days and just couldn't wrap my head around it. Naturally, as I love churning ice cream and gelato, I thought it was an easy solution to stay within my comfort zone and an opportunity to tackle a rum raisin ice cream that I have wanted to make forever. 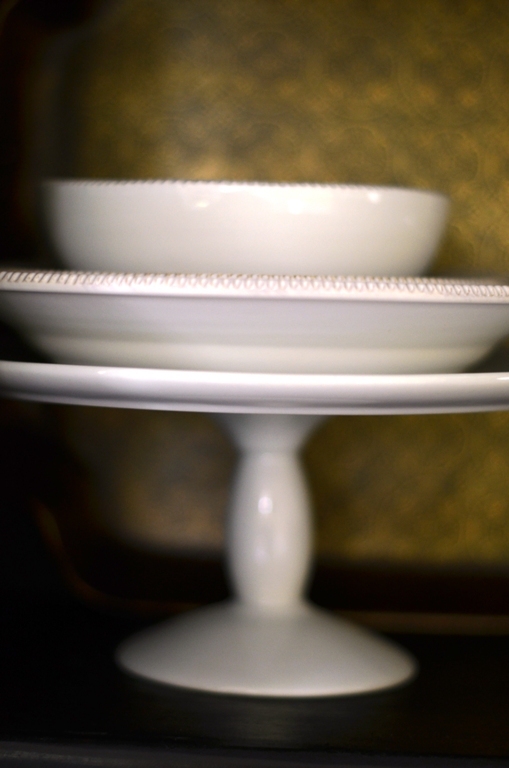 I churned a trio of frozen ice creams for this Thanksgiving and will serve my guests a scoop of each in a tasting sampler. Wonderful make ahead, one boozy and all delicious frozen treats for the holidays!! Happy Thanksgiving!! 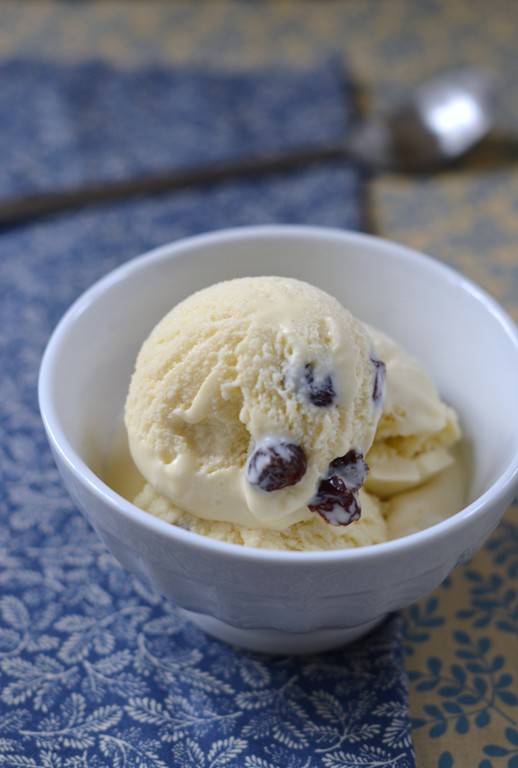 Directions:
Add rum to raisins into a small sauce pan on high heat. Take off the heat when rum/raisin mixture starts to boil. Let cool and keep soaked for two hours The raisins will be beautifully plump and boozy. Drain raisins and keep both raisins and rum refrigerated separately overnight.
Whisk egg yolks in a bowl.

Add the milk and sugar into a medium sauce pan on low/medium heat and mix until the sugar dissolves. When you see bubbles appearing around the edges of the pan, pour a couple small scoops of milk into egg yolks while whisking to temper egg yolks. Add the yolk/milk mixture into the milk pan and continue whisking on low/medium heat until a light custard is formed. This process takes about ten minutes.

At this point take custard off the heat and let cool. Add the whipping cream to the cooled custard mixture, mix, and chill overnight.

Next morning, strain the custard through a sieve and add the rum (about 6 tablespoons*) to the ice cream base while reserving the raisins to be added later at the end of the churning process.

Churn in ice cream maker as directed by manufacturer. *(see note below) Takes about 20-30 minutes to reach soft serve consistency. Add the strained raisins to ice cream and churn for a couple minutes longer. Scoop into an ice cream container with a tight lid and freeze for at least a few hours or until solid before serving.

Cook's notes:
*Although rum technically is supposed to be gluten free, and it was so years ago, today you need to double check. We made sure the brand we used was gluten free.
*Most recipes I saw called for maximum 6 tablespoons rum. You can add as little as 3 tablespoons or at most 6 as the rum flavor gets more pronounced as time passes. I also used only 1/4 cup raisins since my guys aren't huge fans. Feel free to up it to a 1/3 cup raisins. If you do, you might have less than 8 rum left after you drain raisins the next morning.
*Alcohol does not freeze so it adds to the softer, creamier consistency of the ice cream. Adding a tad more, like I did, at 8 tablespoons, might get you really super soft ice cream, that melts quicker. Use your judgement and take into account your preferences.
at November 17, 2011
Newer Post Older Post Home
©2009-2020 Shulie Madnick. All rights reserved.