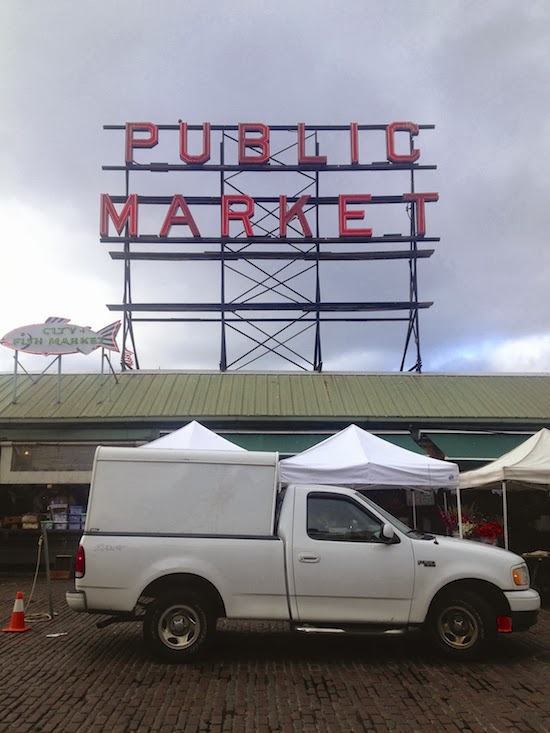 Almost two weeks ago I attended my first ever food bloggers conference organized by Foodista and Zephyr Adventures. The conference couldn't have had a better backsplash than Seattle for the food loving crowd that attended, myself included. Every chance I got, every spare moment, I put my flat walking shoes on, sometimes flip flops and zipped over to Pike Market, just a few walking blocks from the W hotel, where IFBC 2013 (International Food Bloggers Conference) was held. I often arrived before the stalls were opened, or as the vendors were just about to unpack their wares, so I wouldn't miss out on sessions held at the hotel. 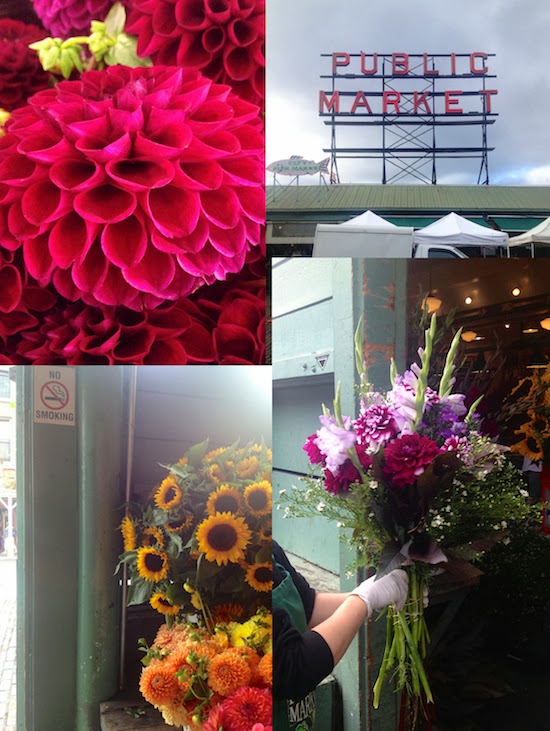 Heading down to Pike Market first thing in the morning, each morning, was invigorating. I woke up and left the lobby of the hotel to be greeted by the morning cool breeze and a sense of a great adventure. Butterflies titillating my stomach with excitement of what lies ahead. I surfaced into the streets on Seneca and walked along 4th, down towards 1st and Pike, my mind in anticipation of the images that I will capture and the ones that will forever be burnt on my mind. I only hope I stay sharp and lucid that long. I was embracing it all even if at first I felt tentative and a tad overwhelmed to be thrown into a sea of strangers in a new town without my anchor who stayed back at home. Fortunately, IFBC and Seattle couldn't have been more welcoming, letting me in and then emerging with so many fond memories, new amazing friends and incredible, mostly food-centric experiences. 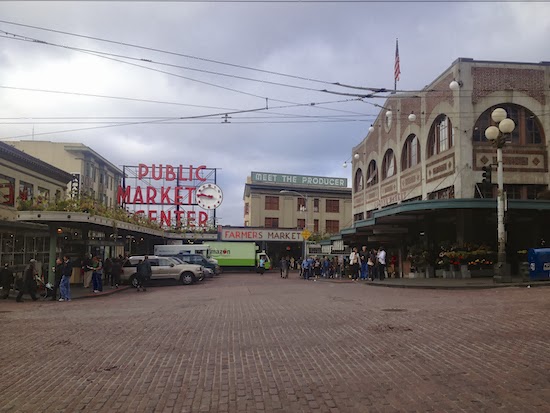 Seattle has many neighborhood farmers markets. Pike Market is considered touristy but I imagine all of us who weren't local, again myself included, wish for the day in and day out Pike Market in their own neighborhood and town. Even if only for the gorgeous floral arrangements at super reasonable prices, ranging from $5 to $15 for the most elaborate. I would buy a bouquet or two to lift my spirits once in awhile when some nourishment and inspiration is needed, and then make our house even more of a home twice a week for certain.

Not only the floral arrangements at Pike Market lured me in, but also the locally foraged prized chanterelle and Matsutake mushrooms I spotted on the curb side. We were lucky to be in town during mushroom foraging season. I picked up a couple bagfuls of each to bring back home. Thank you Wanda for helping me identify the mushrooms as Matsutake mushrooms, otherwise known as Pine Mushrooms. 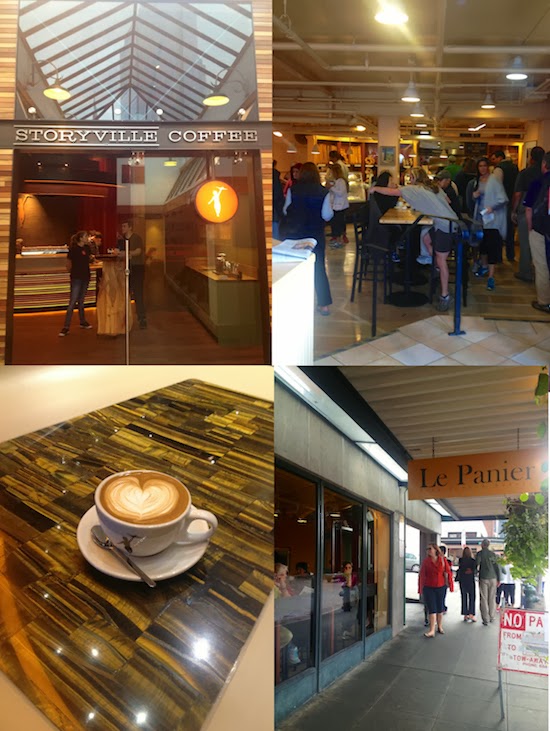 Seattle lived up to and exceeded its best coffee reputation and expectations. One of my most favorite cafes in the market was Le Panier (top and bottom right photos above). I started off my mornings at Le Panier over a flawlessly foamed cappuccino or two at the right heat, as in temperature. None of that lukewarm coffee I encountered in many 'designer' coffee shops, so to speak, in the past. I would skip the almond croissant in favor of the flaky savory puff pastry shells filled with spinach. I savored every bite. At Storyville's (left top and bottom photos above) soft opening, I loved the fruit and nut scone at this sleek space overlooking the market, with a view of what seemed like the last cruise ship to Alaska this season. 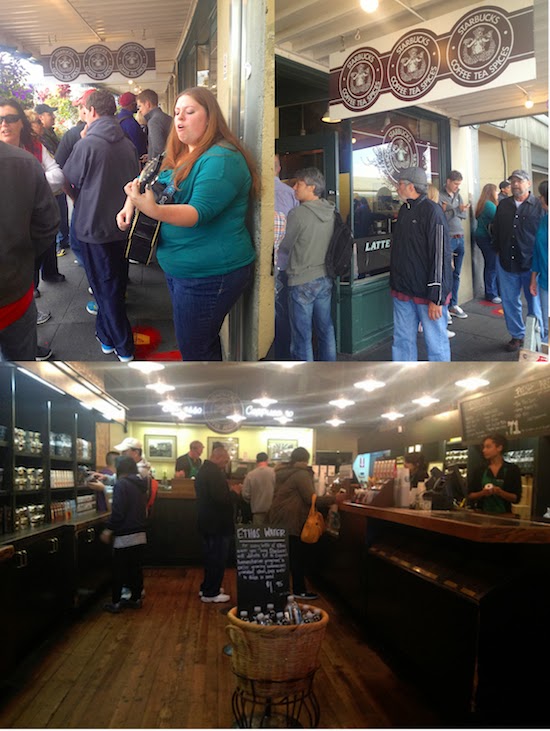 Speaking of coffee, the first Starbucks store was opened on 1st and Pike at the market in 1971. I should have probably picked up some in store memorabilia and ordered a cappuccino. The place had long lines and was always mobbed. Rumor has it that Starbucks preserved the original facade and feel of its first location. 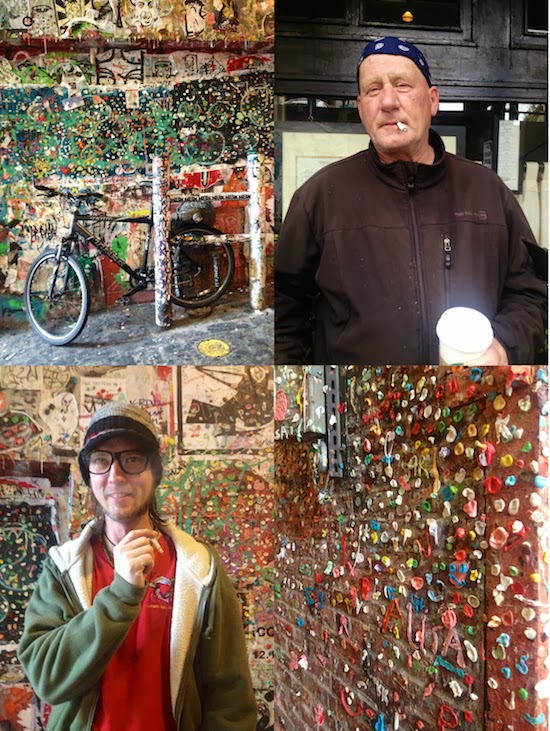 On my last day, very early in the morning, I accidentally came upon the gum wall at a deserted alley under Pike Market's belly.  I encountered two interesting fellows (only one pictured on bottom left above) who stumbled into the alley. They were seasonal workers who came up from Florida to the Pacific Northwest to work as fishermen. With no one else in sight but only us three, I was counterintuitively to common sense, for some odd reason, fearless. With a delayed reaction, I asked them "you aren't dangerous, are you?" at which they said no and laughed somewhat awkwardly. As I emerged from what seemed a very surreal parallel existence, I encountered this serious looking burly fellow (top right photograph above). He said "I am not Russian. I am Croatian"(insert a Russian, or Croatian for that matter, accent here), and when I answered to his query, "I am originally from Israel," he responded: "Sha-lom!".

Shalom indeed. Hello, goodbye and peace (out), Seattle. I will be back for IFBC 2014. It cannot arrive soon enough.

The photographs in this post were shot with my iPhone. I will include more highlights from Pike Market, sessions and food at IFBC and Seattle in general soon. This post was getting too long.
at October 02, 2013
Newer Post Older Post Home
©2009-2020 Shulie Madnick. All rights reserved.