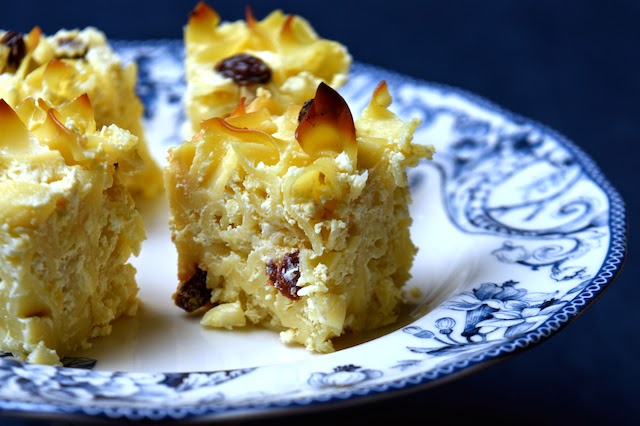 Ok, I'll spare you the history lesson. You can google how pasta came to the Jewish world. I've touched on the subject a tad here.

In any event, this video cracked me up so much that I had to make a noodle kugel (I haven't made it in a long while), reminiscent of my first noodle kugel I ever had, in Century Village. If you don't know Century Village, it's where all (I exaggerate!) the Jewish retirees flock to when they get, let's say, grumpy and mature. I am well on my way, so don't get offended, if you are heading down that slippery slope. Though I don't see myself in Florida. Jonathan claims it's too flat! But I digress...

Both Jonathan's grandmother, who was very opinionated and had loads of yarn, and her youngest sister, who was a gentle southern Jewish belle (Imagine?!) with pretty cheekbones, made this kugel from one of the temple's sisterhoods cookbooks, I gather. It is, to this day, my favorite noodle kugel. Upon a quick search, turns out, it is a pretty standard protocol, as far as noodle kugels go. I adjusted it a tad, but in all honesty, you will probably find a similar version in your sisterhood cookbook or upon a quick google search.

I am not happy with the photograph, but when I presented a question on social media, here and here whether or not to post the recipe or not, since my focus is more Mediterranean and Indian and not Eastern European, the answer was unanimous, a resounding YES! Can you still hear the echoing yesyesyesyes... fading into oblivion?! So here by popular demand I present to you the sweet mac and cheese. What?!

This post is so light hearted cause' for some reason today I am delirious!

Bring a large pot full of water to a boil, add the egg noodles, reduce the heat to medium and cook for a few minutes until al dente. Drain.

In a large bowl whisk together the sour cream, cottage cheese, eggs, vanilla, pineapple with juice, sugar and raisins and mix. Add the cooled down noodles to the wet mixture in the bowl and mix.

Pour the noodles into the greased 8X12 pan and dot it, on top, with the butter cut into small pieces. Bake for 30 minutes, rotate pan and bake for 30 minutes longer or until golden on top and the noodle kugel is settled with no liquid remaining in it. Let it completely cool before cutting and serving. Best served after being chilled in the fridge overnight.

Can be cut into squares once chilled overnight and frozen in a Tupperware lined with parchment paper. Thaw in the fridge.

Author's note: Even with 1 cup sugar the kugel is lightly sweetened.