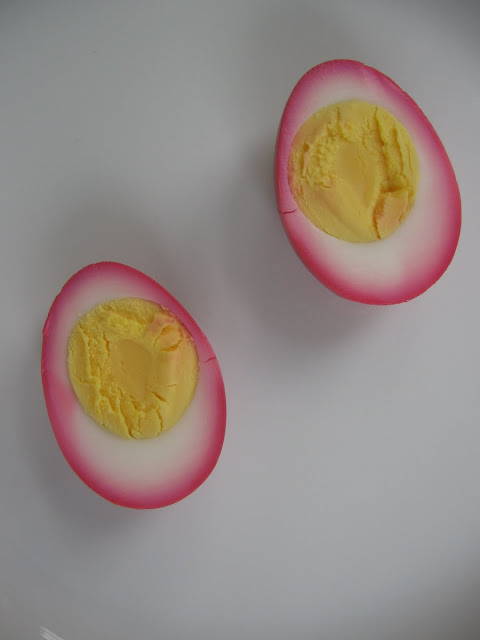 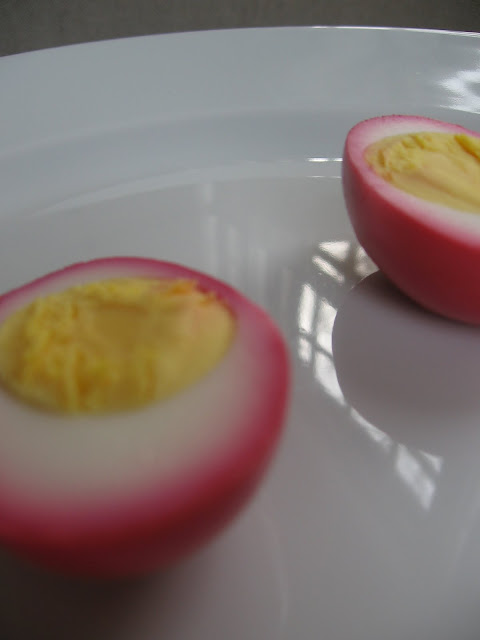 New Year's Eve continued, Apparently if you frequent Pennsylvania bars, you will see these brined pickled eggs displayed in jars lining the shelves....I was fascinated with this recipe when I saw it at Epicurious.com, mostly because of the natural dye of beet and the possibilities it presented me for future experiments with the beet dye.  I was never one to use food coloring even in the days when eco friendly, health food and organic did not even cross my consciousness. Food colorings seemed fake and unhealthy to me and the couple of ventures into unnatural dyes failed miserably and put an end to that phase. We obviousely need to be conscious of what we eat to keep healthy but a little luck, maybe?! Which brings me back to New Year's Eve, recently I've read about lucky foods for the New Year's and unlucky ones we should avoid eating on New Year's Eve. One surprising discovery I made, never heard of it before, to avoid eating chicken, so that your luck won't fly away. Jonathan says chicken don't fly, but still, here goes the chicken skewers I was planning on serving, the duck and any other fowl that was on the menu.  Heard before of fish as being a lucky food, although theoretically could swim away, but not only in Jewish tradition but also in oriental and other cultures fish established itself as a lucky food.  For us fish head, although have never seen a fish head on an American Jewish table, symbolizes being the head and not the tail, being a leader and not a follower. In other cultures there are other interpretations to this custom.  I altogether decided I am sticking to fruits and vegetables they are deep rooted in the soil and our luck won't fly away for 2010!! Can't shake that deeprooted superstitious Indian upringing of mine!!
For the brine:
3 cups water
1 cup distilled white vinegar
1 bay leaf
1 teaspoon sugar
1 shallot, diced
1 small beet, peeled and sliced
For the eggs:
12 hard boiled eggs,shelled
up to 1/3 cup mayonaise
2-3 pickles diced
Salt and pepper to taste
Dill for garnish (optional)
Directions:
Put all brine ingredients in a sauce pan, bring to a boil, turn down once hit boil and simmer covered for 20 minutes.  bring to a complete cool and move to large air tight container.  Add hard boiled eggs to brine and move eggs gently every couple of hours for even dying. Keep refrigerated.  I hard boiled the eggs and kept them overnight in the fridge, the next morning it was picture perfect. I suggest, make brine the night before and add eggs the morning of New Year's eve.  Devil the eggs and hour prior to serving. Half the egg, take egg yolks out and mix with Mayonaise, diced pickles, salt and pepper slightly.  You can add fresh dill into the mixture or as a garnish.  You can devil the eggs million different ways!!
at December 30, 2009
Newer Post Older Post Home
©2009-2020 Shulie Madnick. All rights reserved.