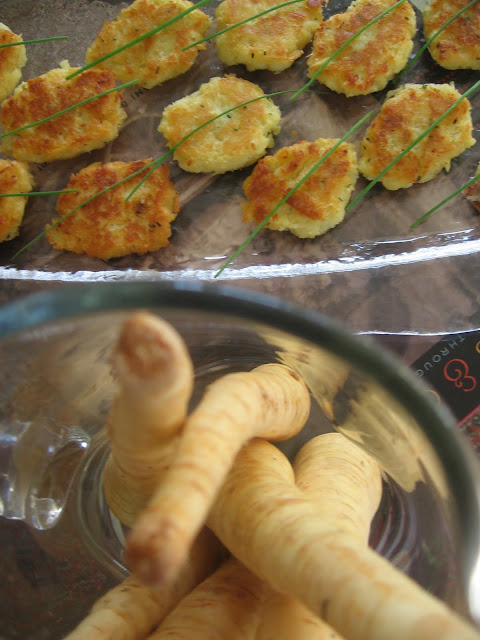 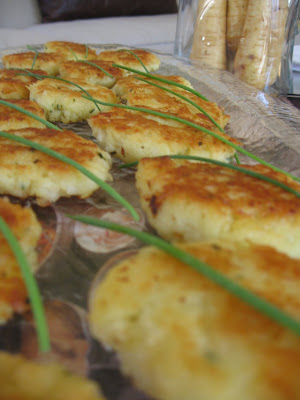 This parsnip pancake was the first bite I had this past Thanksgiving dinner. It was such a pleasantly surprising, dainty, delicious bite, that even if that would have been my first and last bite that evening, I would still deem that holiday dinner gathering a great success!! Don't want to set up your expectations too high since I came with none and discovered a treasure. Try it for yourselves and hopefully you'll get as much enjoyment out of it as I did. My friend Geri found this recipe somewhere out in cyberspace and instead of cooking parsnips in water, she microwaved them. At the risk of losing some of the goodness and vitamins in the parsnip, I would still suggest boiling them. She also mashed them which gave it a nice creamy consistency, but for those who like texture, grate!! Either way works out well. I personally eat my pancakes plain, no sour cream, no apple sauce, with one exception....if you happen to find the apple mango sauce Trader Joe's carried for years, and to my disappointment disappeared this year, buy it!! It will be a great pairing with any pancake. As you can see this particular parsnip pancake can make a journey into any Holiday cocktail party as an appetizer and the center of attention at the Chanukah table!! Enjoy!! BYW, for those of you who do not know a parsnip, it looks like an extremely pale carrot, not a tinge of orange in sight, but wonders of flavor (see pics).

Ingredients:
2 lbs parsnips (peeled)
1 teaspoon salt (can even do without, a first for me!!)
1 medium onion grated
1 egg beaten lightly
up to 1/2 cup flour (do not want the pancake to be too cakey).
2 tablespoons plus chopped chives
4 plus tablespoons canola oil

Directions:
Peel parsnips and add with 1/2 teaspoon salt to a pot full of water. Bring to a boil and turn down heat to a medium, cook parsnips until soft but not mushy. Grate (I like texture) or mash parsnips. Add salt (remaining 1/2 teaspoon), grated onion, egg, flour and chives. Heat up oil in a non stick frying pan and drop small or medium batches of pancakes according to desire. I keep them small 'cause' they are surprisingly sweet but dainty in flavor and a small bite suits it!! Cook in oil until golden on both sides and drain on paper towels. Serve warm with a dab of sour cream, and a dab of apple sauce immediately on top of the sour cream. Garnish with extra chives on top.
I used more than 4 tablespoons oil but for a real low fat, practically oil free version, two options:
1. Geri used an electric frying pan, coated it with thin layer of PAM spray and fried it until golden. I never ever use PAM, don't intend to, but honesty speaking Geri's came out grease less and delicious!!
2. Line a baking sheet with parchment paper, brush parchment paper with a layer of canola oil. Form pancakes, line on parchment paper and brush lightly with canola on top. Bake at 400F about 30-45 minutes until golden and flip, takes shorter amount of time to golden on other side, once flipped. For the last night of Chanukah this year, I made a batch in the oven to bring over to a friend's Chanukah party. The golden sheen was so beautiful that you wouldn't even know the pancake wasn't fried.
Variation, potato/parsnip pancake:
Second batch I made, I had only 1 lb parsnips left, I peeled two medium potatoes, added them to water with peeled parsnips, cooked, drained and mashed them together with parsnips. Most definitely add salt to this version, and follow rest of ingredients and directions from original recipe.
at December 09, 2009
Newer Post Older Post Home
©2009-2020 Shulie Madnick. All rights reserved.