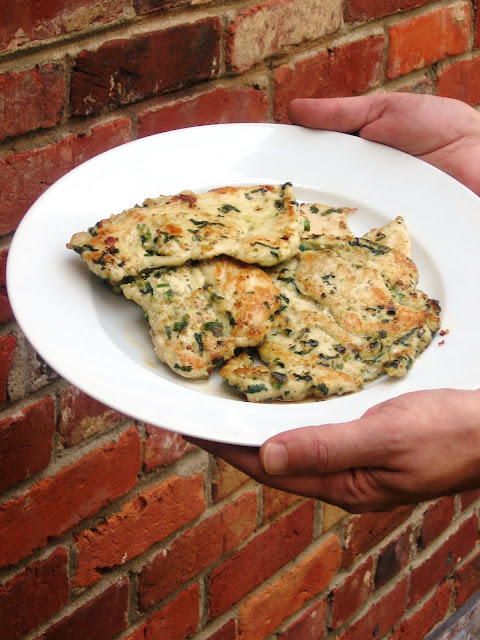 With the Holiday season, I was completely lambed out, and was looking for fresh, vibrant menu befitting of the warm temperatures and gorgeous days outside.  I watched yet another Israeli culinary icon, who has a TV show, and luckily again, I can access it on the internet.  The chef's name is Erez Komrovsky, he is a Tel Aviv native who opened many restaurants in Israel, and one day, years back, packed up left his urban life for nature, and moved to picturesque Galilee.  I wish one day to make it to one of his cooking workshop, where you pick vegetables right out of his organic garden and cook.  He is an intuitive cook that is a gift and a genius that cannot be taught. The chicken cutlets he cooked on a recent show came out delicious and moist.  I was fortunate enough, when grilling or cooking chicken breast, I never had instances of dried out chicken, and credit all lies within the tenderizing marinade. Combination of the mustard and coriander seeds reminded much of fragrant lime, lemon basil or Kaffir lime.
Can't really pinpoint or articulate, the unique combination of aromas rising out of my mortar and pestle, but all three came to mind. An addition of a diced jalpeno gives it a bit of a kick.  My first inclination is always to add lemon or lime to the marinade, surprisingly enough the recipe did not call for it. I behaved and followed the recipe and much rewarded for my restraint. I put the cast iron skillet on the grill to get the sear.  Make sure the cast iron skillet is HOT! The chicken can also be cooked in a regular skillet on top of the stove. I did not want the grilled grid on these scallopini'd cutlets.  We will be grilling this coming Monday for a bunch of  my son's high school soccer varsity teammates.  Sorry in advance 'Meatless' Monday.  Promise to be vegetarian on Wednesday. The spot lights in our back yard are pointing in the wrong direction, the porch light does not help much either.  Jonathan was holding the flashlight while I was cooking and snapping couple of shots (the smaller pic was shot at night).  I dragged Sagie out to get in the fun, reluctantly (I don't blame him) he left a final four game he was watching. I need to sign off guys, am going to watch the game  with the boys.  So happy to add this recipe to my repertoire I am sure you will enjoy it too:). 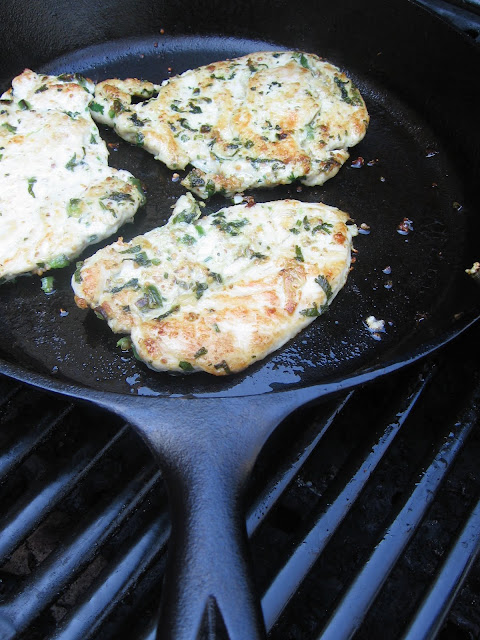 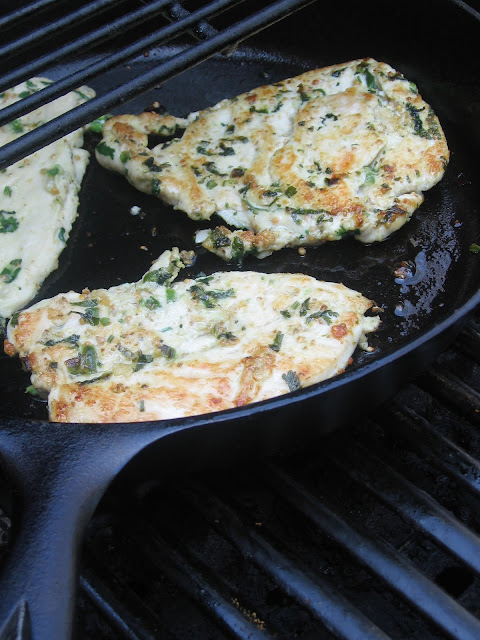 Chicken Cutlets
Ingredients:
4 chicken breasts (scallopini'd)
5 tablespoons olive oil
3 tablespoon cilantro, finely chopped
2 garlic cloves, minced
1 jalapeno, diced (optional, see note*)
1 teaspoon mustard seeds
1 teaspoon coriander seeds
Salt to taste
Canola oil for brushing skillet
Directions:
Pound chicken breast inside large ziploc bag or between two plastic sheets into a thin cutlet, much like a scallopini. In a mortar and pestle crush the coriander and and mustard seeds. In a large rectangular dish with a lid (tapper ware and the likes), add oil, crushed mustard and coriander seeds and the rest of the ingredients. Taste the marinade for salt prior to adding the chicken and adjust. Mix marinade.  Dip each cutlet into marinade and leave  flat in the same dish.  Make sure all cutlets are covered with marinade, cover with lid and keep in refrigerator to marinate for at least 2 hours. Heat up preferably cast iron pan, but any frying pan will do, brush skillet with a bit of canola oil, make sure it's HOT and sear cutlets on high heat until done. Approximately few minutes on each side. Brushing skillet with canola is done only once prior to cooking. Cut a slit into chicken after getting golden on each side to make sure it's done.  Serve with mashed celery root and potato and micro greens.  Recipe will follow in one of the next posts. Note: Normally I would just grill these cutlets for a barbecue! 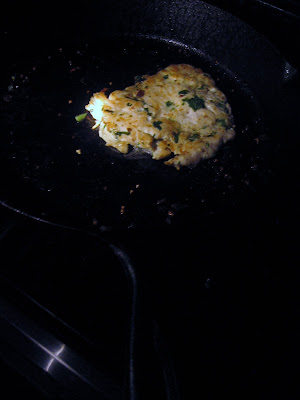