Quinoa - An Ancient Grain from the Andeans to the Mediterranean 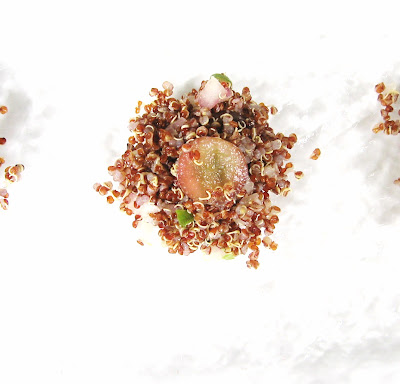 From what started as a Mediterranean BBQ somehow I ended up with Quinoa.  Something about the ancient grain like felt right to fit right in with the Mediterranean fare. With added halved grapes, after all, the grapevine was domesticated in Turkey and is one of the seven fruits and grains of the Holy Land. It gave the salad a Mediterranean twist. To accentuate its Andean mountains, South American origin I used Agave instead of Maple syrup or honey for the vinaigrette and lime. Although I had both Agave and Quinoa while dining out, both were firsts in my kitchen this past weekend.  For a natural sweetener Agave is just different from Maple syrup or honey, probably a matter of a habit and an acquired taste. 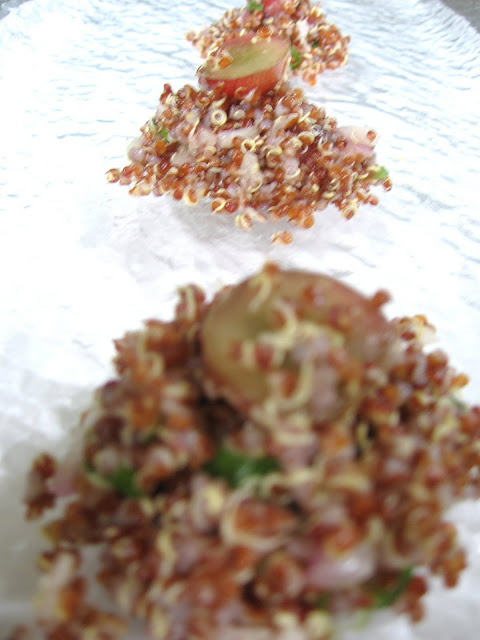 The pairing of Agave with lime proved to be delicious! The beauty of quinoa is that it keeps it's characteristics, you can't easily overwhelm it with vinaigrettes and such.  It keeps its consistency, somewhat quiet, mildly nutty flavor for a refreshing departure and another healthy alternative to the familiar. Before I forget both, agave and quinoa, were Costco organic finds! I made two different quinoa salads one with white from Costco and red (pictured) from Whole Foods.  The grain cooks like rice only difference with 1quinoa:1 1/2 rice proportions is unlike rice, I don't think you can ever mess up cooking quinoa, which was encouraging start to begin with. It's airy and fluffy, rich in fiber and unlike rice or wheat is rich in protein.  Gluten free! From my readings I gather Agave might be controversial for the allergy prone, we are prone but haven't had an incident. You can replace Agave with maple syrup or honey for maintaining the Quinoa claim for friendly food fame!

Ingredients:
1 cup white or red quinoa
1 1/2 cups water
1 cup of halved red grapes
2-4 scallions, white and green parts, slivered
1 small red onion, diced
Vinaigrette:
3 tablespoons mild olive oil or canola
Juice of handful grapes (about 8)
Juice of 1/2 lime
2 teaspoon plus Agave, maple syrup or honey
Touch of salt
Freshly ground black pepper
*note on vinaigrette: You can make double the batch. Use half when you make the salad, toss the rest in just before serving.  This vinaigrette is more liquidy than emulsified.

Directions:
Rinse and drain quinoa.  Add in a pot quinoa and water, bring to a boil, reduce to low and cover with lid until all liquid is absorbed by quinoa and evaporated. Turn heat off and let quinoa sit for 10-20 minutes to cool off for light and fluffy consistency.  You will see the grain will have mini shoots, pea shoot like which signals it's cooked.  Fork the quinoa into a bowl and add the halved grapes. Whisk the rest of the ingredients together for a vinaigrette and toss with quinoa grape mixture.  You can make this salad a couple days in advance.

*Note: Be creative, customize flavoring to your liking.  If you wish to add more grapes go ahead! Use less lime and use a tablespoon of Agave, go wild!! Make this recipe your own!! You can add shallots in addition or instead of red onions and scallions.

Credits: Grapes and grape juice use was inspired by salads I had in the past and most recent twitter #fni chat with Cooking with Caitlin.
at June 16, 2010
Newer Post Older Post Home
©2009-2020 Shulie Madnick. All rights reserved.