Dehydrated GoldRush Apple Chips & Life, Not For The Faint At Heart 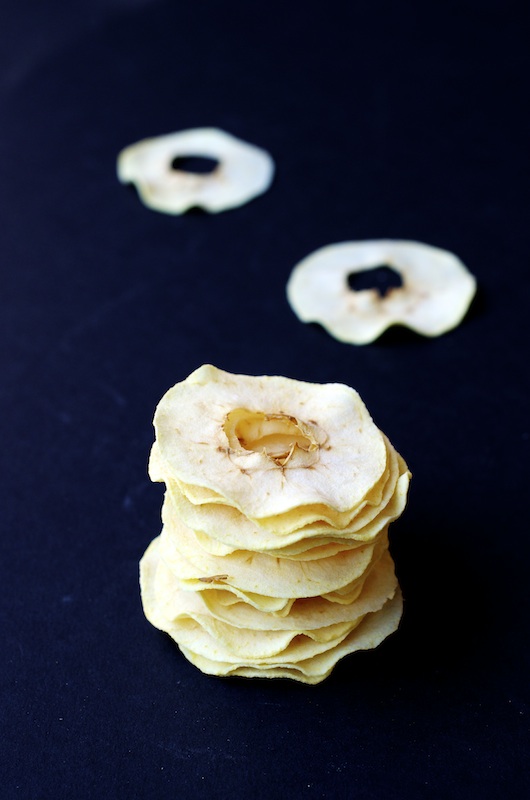 I had promised awhile back to post this dehydrated apple recipe, but it has taken me some time to deliver. As you can tell from this, I have been obsessed (a reoccurring theme) in recent years with the GoldRush apples. Golden Delicious has now taken the back seat. In the DC area, I have only seen the GoldRush at Farmers Markets. It makes the outing on a weekend worthwhile, even if only to pick up some apples, mushrooms and local cheese. 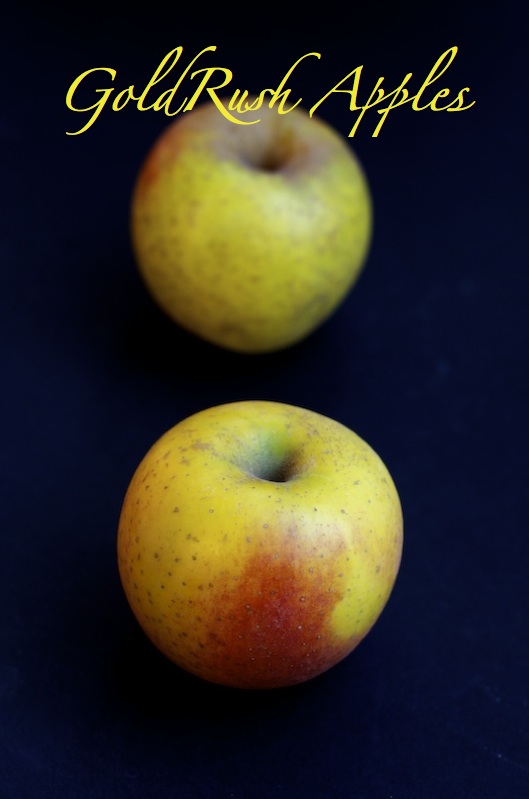 For dehydrating apples I found over the years that most apples will work with an exception of one, the Granny Smith. I love the Granny Smith apples in baking, I won't substitute it with any other variety, but when it comes to dehydrating, they are my least favorite, one dimensional tart notes only. The dehydrated apples can have a softer rubbery feel but if you keep them in the oven longer they turn into chips. The apple chips shatter like thin glass at the faintest touch, it's really neat.

During the winter of 2011, as you can see here, I experimented with many apple varieties, you can also see the more subdued, serene tones to my photography as opposed to the more vibrant images in this post. Raw emotions bring out the bold but somehow I keep it simpler.

Warning: An intense writing below, you can skip down to the recipe at the very bottom.

I was debating whether or not to write about this, but raw and shatter pretty much sums up this week. Unlike the apple chips nothing about a life shattered is neat. Nothing about a loss of a life full of hope and possibilities is right. Broken into smithereens, turned into dust, like thin apple crisps. Nothing about a picture of a group of friends gathered in suspense, rumors swirling, keep calling their friend's cell, hoping, is ok. Intermittently someone bursts out crying. Emotionally exhausted. A creeping hopelessness shrouded with helplessness. A dark, hollow feeling. A dawning realization that their friend will never answer, his cell, again.

Monday, January 21, 2013, this week, my son lost one of his very good college friends, Jake, 21, in a horrid off campus apartment fire. Sagie (pronounced Sa-gee. gee as in geese) is an only child so his friends mean the world over. Seems as though I know Jake through Sagie. Jake was an optimistic fellow, full of smiles. I can't imagine his parents' and siblings' gut wrenching agony and pain.

Our son, Sagie (means exalted or a peak of a mountain) was always mulling over the question of life and death ever since he was a child. Something that always profoundly bothered him. the loss of a life, so absolute. Just something inherent, like when he was two, he was mesmerized by tires, an innate curiosity, both Jonathan and I, were lacking. We were never mechanically, or anything car, inclined.

I mentioned in the past, Sagie's toying with having this one specific tattoo ever since his teen years. Then there was much research, discussion and question of the Jewish law. Throw into the mix my fears, as a mom, of an allergic reaction or an infection. Not to mention, tattoos, a completely foreign concept to Jonathan and me. Again, individuality, kids have a way of developing it. Self inflicted gashes in your flesh are forbidden according to the Jewish law and therefore being buried in an Orthodox Jewish cemetery will be banned. Exceptions are made to Holocaust survivors. You can be buried outside the cemetery fence with the 'impure and tainted'. I hear it is not completely true today in Reform and Conservative burial grounds, but still, does Sagie wish to take chances?!

It's Tuesday, January 22, 2013, this week, all up at UMASS Amherst are stunned. Almost passive. Don't know what to feel but overcome with an overwhelming numbness. First day of the semester back, I was not going to ask Sagie if he is going to classes. He calls me later that afternoon his body in gashes. He tells me, it only made sense given the circumstances. He tells me, there is no better time than the present. He tells me, he had to do it. I tell him, I am proud but did he get a disinfectant? Later that day they gathered for an informal memorial service that the kids organized on campus. Each sharing, his and her love and memories of Jake and deep grief. It was a non denominational gathering. They might or might have not have said the Mourner's Kaddish (prayer).

The prose on my child's ribs say: "The only truly dead are those who have been forgotten" A Jewish proverb.

Jake will always be alive in the memories of so many lives he has touched, on this little corner of my virtual pages and among you, to him, strangers. The funeral Mass will be held on Saturday, January 26, 2013. The kids are going. We thought of heading up north, but Sagie needs to go through this by himself, with this amazing supportive of each other group of his UMASS friends.

1 large GoldRush or any other favorite apple variety

Preheat oven to 200F. Core the apple with an apple corer. Peel and slice very thin with a mandoline. Lay flat on two parchment paper lined cookie sheets. Let dehydrate in the oven for 2 hours for a soft dehydrated consistency or 3 hours for crispy apple chips. Flip apple slices with a spatula 1 1/2 hours into dehydrating. Store in an airtight container when cool.

Cook's notes:
1. Key is working in a timely, efficient fashion when peeling, coring and slicing, so apples do not oxidize.
2. Keep in mind ovens vary so adjust time accordingly.
3. I have tried the lower than 200F heat overnight in the oven method, but it takes about 8 hours, and I do not like to leave the oven on while sleeping.
at January 25, 2013
Newer Post Older Post Home
©2009-2020 Shulie Madnick. All rights reserved.