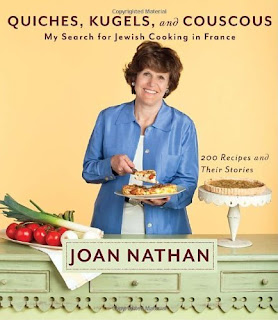 Five of the upcoming cookbook authors who will be featured in the next posts are of national and international reputation but all live locally in the metro DCs area. First and foremost is the queen on Jewish Cooking in America the famed Joan Nathan. Her new book just released Quiches, Kugels, and Couscous: My Search for Jewish Cooking in France (Alfred A. Knopf, 2010). Quiches, Kugels, and Couscous is the acclaimed Joan Nathan's tenth book. Published in 1994,  Jewish Cooking in America won the James Beard Award and the IACP and Julia Child Cookbook of the Year Award, among many other accolades. I always revered as I understood how much work goes into this tapestry of recipes but the enormity of the research dawned on me only after watching the trailer (press trailer on right) on Joan Nathan's site. The much discussed Pain Petri (Anise-Flavored Challah With Sesame Seeds) I thought, if you bake few loaves, the day or two old challah will be so perfect as a Thanksgiving stuffing base. The anise flavored challah stuffing will be complemented well with mirepoix. added to the mixture sauteed granny smiths and pear and voila a more festive twist to Thanksgiving stuffing tradition, with the anise flavor fitting well with the traditional Thanksgiving spices and fare.
I will be baking the Pain Petri for Friday night dinner tomorrow and saving one to cube and toast for stuffing on Thanksgiving. You can find Washington Post's own @BonnieBenwick's excellent write up on Quiches, Kugels, and Couscous and Joan Nathan's speedy challah here with a link to the Pain Petri (Anise-Flavored Challah With Sesame Seeds) challah recipe among others. Jewish cooking has become mainstream in America, who doesn't love challah and bagels?! Which brings me to @washingtonian's Todd Kliman, Best Bites Blog featuring Joan Nathan's  Quiches, Kugels, and Couscous discussion of 'where Bagels Came from' . Bon Appetit also listed  Quiches, Kugels, and Couscous as favorite cookbooks of 2010 here. While leafing through the pages I find it fascinating the French Jewish community recipes from both, east and west, Ashkenazi and Sepharadic cultures, stories and recipes included for a wide spectrum of recipes all the way from Eastern Europe to North Africa. I Can't wait to try the artichoke and orange salad with saffron and mint, the Provencal lamb with garlic and olives, Italian plum tart as well as many other recipes from Quiches, Kugels, and Couscous.
To enter giveaways:
1. Please follow on twitter @joan_nathan on twitter.
2. Please follow @foodwanderings on twitter.
3. Please LIKE foodwanderings Facebook page if you got Facebook.
4. Leave a comment on this post! You are encouraged to share a comment about  Joan Nathan and Quiches, Kugels, and Couscous or any other thoughts.
4. If you RT or post on your Facebook page this giveaway post link, you get an additional entry. Please drop me an additional comment on this post saying that you did so.
5. Drawing will be done randomly from all comments recorded by Thur., Nov.25 at midnight and the lucky winners will be announced Fri., Nov. 26.
6. Shipping only in the US. Sorry my friends overseas, I hope one day I could afford the mailing.

Disclaimer: I received the review copy of Quiches, Kugels, and Couscous and one extra giveaways copy from Knopf publishing free of charge.  I was not solicited neither my opinions nor my review.
at November 18, 2010
Newer Post Older Post Home
©2009-2020 Shulie Madnick. All rights reserved.