Just when I think, "been there, done that" and "it's impossible for me to fall in-love with yet another doughnuts shop," Fany Gerson the owner of Dough makes me do exactly that, fall in-love with her charming shop and her artisanal doughnuts in the Flatiron district in Manhattan. The original Dough outpost is in Brooklyn.

How is it even possible in this saturated doughnut market to set yourself apart?! Dough does exactly that. Going in, one, I was certain I would be familiar with the dough, two, I was also sure I would hate the Hibiscus one, if not have a major anaphylactic reaction to it first. Wait, I am allergic to lavender not hibiscus. Never mind number two!

Dough doughnut is the child of an American doughnut and an Israeli one, if they were to be married and have soft and cottony doughnut babies. Though the doughnuts aren't mini, they are full size doughnuts.

On Dough's website it says it was inspired by European and Latin American doughs. Hmmm to that. 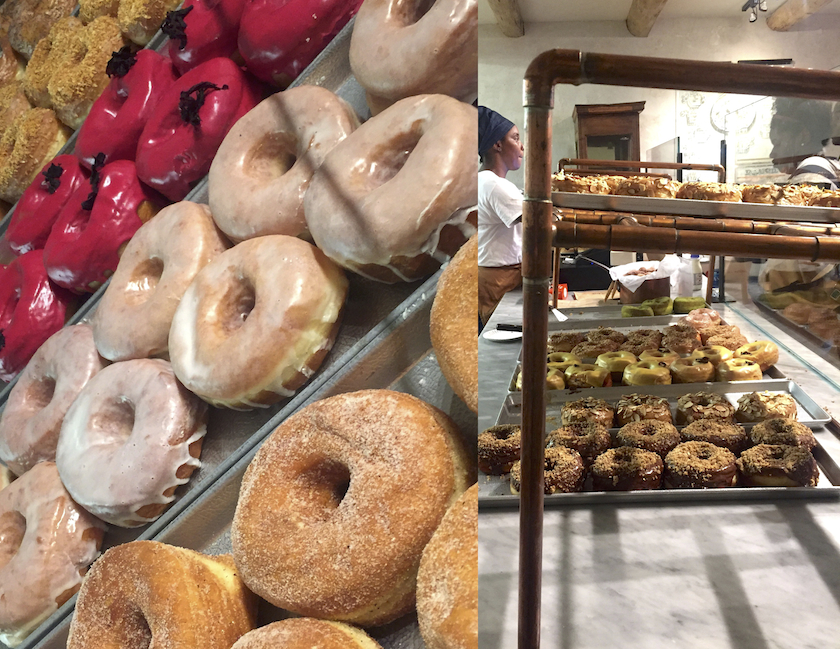 The hibiscus, Gerson's signature doughnut, was pure sophistication with the candied dry hibiscus garnish on top. The garnish had just a touch of tang but complemented the hibiscus glaze and the doughnut very much.

While at Dough, go for the specialized flavors like the unique hibiscus one. The combinations are carefully thought through and the execution is a brilliant sensation of flavors and textures. My friend Jackie's, the Singing Chef, new favorite is the Cafe Au Lait.

I haven't had a chance to try a variety of doughnuts at Dough. We were in NYC on our 28th year anniversary (July 12), mixing food with some walking and biking in Central Park and visiting a museum or two. While Jonathan now trusts my food agenda, and enjoys our food explorations and discoveries very much, he isn't for the lack of a better term, a foodie at heart.

Next time I'll go to Dough on a doughnut crawl with Jackie, but not before I start juicing! Tomorrow!